When soprano Barbara Padilla took the stage on “America’s Got Talent” in 2009 and performed a stunning rendition of “Con to Partiro,” a star was born. “That was the greatest single vocal performance we’ve ever had on ‘America’s Got Talent,’” said judge Piers Morgan. Padilla eventually won second place, but she comes in first when she shares her story of overcoming Hodgkin’s Lymphoma. 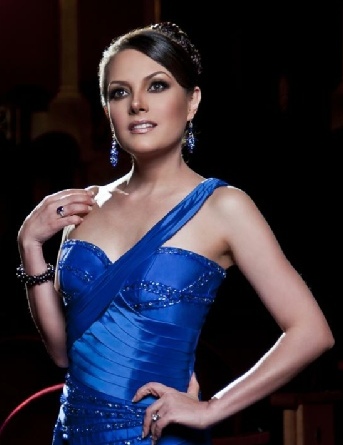 As a child in Guadalara, Mexico, Padilla was blessed with many artistic and musical gifts and was encouraged by her mother to follow her dreams. “I remember singing in the car on the way to the beach and my mother staring at me, astonished at my voice. I guess I was pretty good. It just seemed easy,” she laughs.

Performing in school plays and choirs then gave way to six years of dancing with the Ballet Folklorico de Mexico. Along the way, Padilla also took acting lessons and played the piano. Eventually, she found a voice teacher named Alicia Rosales, and at 18 years old, she turned professional as a singer.

She also began college, at the school of music at the University of Guadalaraja. There, she was led to her next teacher, Enrique Suarez, who Padilla tracked down at his office on a day he wasn’t supposed to be there. He wasn’t known for taking on new students easily, but Padilla was not deterred. “I don’t like to give up before my goal tells me
‘no.’ I’m not going to insist, but I’m going to ask,” she smiles. Suarez gave her an audition, and then became her champion.

Despite Padilla’s success, all was not well. “I was always tired, and was losing weight. I’d always been skinny, but this was different. I started noticing a growth in my neck. I thought I was developing muscles from singing! But it kept growing, and it was not symmetrical, so I knew something was wrong.”

Coincidentally, Padilla’s mother was the chief social worker at a nearby hospital, so one day after school, the star soprano took the bus to the hospital to meet her. “I told my mother about the growths and she took me to the chief of surgery’s office. He was not happy when he looked at me, and said he needed to do a biopsy. The funny thing is I wasn’t scared, but I was afraid of losing my hair during chemo or something. My mother and I just started laughing. There was no need to start crying at that point.”

Padilla was diagnosed with Stage Four lymphoma. During treatment, the chemotherapy burned her veins and she was often sick. Even so, she completed treatment and went on to graduate. She got a job with the State Choir as section leader, but soon came her third and fourth relapses.

“The choir conductor, Harlan Snow, and his wife decided to send me to M.D. Anderson Cancer Center for treatment,” she says. “I had no money. I was still living at home. I had never been to Houston! He got a group of sponsors together and I arrived at M.D. Anderson in August 1998. A woman named Judy Hoover picked me up at the airport and she soon became one of my best friends. I learned that no one ever says no to her.”

One person who also soon learned that was Peter Jacoby, the music director of the Moores School of Music at the University of Houston. While Padilla was waiting for her treatment results, Hoover cold-called him from the lobby of M.D. Anderson, getting an audition with him for the next day. “I don’t know how she did it,” says Padilla. “He’s never here in the summer, but he was there that day. And Judy had never even heard me sing before!”

Her performance mesmerized him, and Jacoby offered her a scholarship. “It was then,” says Padilla, “that I realized I needed to stay alive. I just needed to get well.” Padilla returned to Guadalajara for several additional rounds of chemotherapy. “What was left of the cancer was localized in my neck. The doctors told me that with all the radiation, I would probably never sing again. It was like a bad joke. But God had the last word. In the end, I lost most of my hair, but I never lost my voice.”

In December 2000, Barbara finally had a bone marrow transplant in Guadalajara, saving her life but temporarily destroying her immune system. Her recovery from the procedure was so remarkable that by January 13 of 2001, she was back in Houston and back at UH. “I never even had a cold. It was a miracle!” she says.

Barbara received her Master’s in Music in 2004. That was the same year she met her husband Kyle. They have a daughter, Elizabeth, and now Barbara has been cancer-free for 11 years.

Three years ago, she decided she wanted to get back into performing and singing. That led her to the “America’s Got Talent” audition at the George R. Brown Convention Center. From there, she progressed through the ranks to taping at the Wortham Center, and then off to Las Vegas for the quarterfinals, and finally to Los Angeles, where she gave her stirring performance. “During the entire process, I wasn’t thinking as I kept going. I just wanted to absorb everything and enjoy it all. I knew it was never going to happen again.”

And now, she’s going to release a CD several years in the making. “I chose the title ‘Viviendo’ because it means living in Spanish,” says Barbara, “and I am so grateful for the gift of life. My fight against cancer was a very painful and challenging time for me. However, in some ways, it was a blessing because it brought me to the rewards I have today. My faith, my family and my friends helped me through a difficult ordeal, which makes this chapter of my life and my career so incredibly special.”

How special? Well, for one thing, when she arrived at the Capitol Records Studios for the first time to record in August 2011, she found a reserved parking spot out front with her name on the sign. She was also provided with two studios, a 55-piece orchestra, and a recording engineer named Al Schmitt who has recorded and mixed no fewer than 150 gold and platinum albums. Masterminding it all was producer, recording artist and Concord Music Group partner, Gregg Field. It’s a far cry from standing in line at the George R. Brown.

“I actually stayed with Gregg and his wife Monica Mancini in Los Angeles when I was out there recording,” she says. “It’s nice when you stay at someone’s house; you end up feeling like family.”

Just then, a song came on the Starbucks sound system. Barbara paused and looked up. “That’s Monica Mancini, who we were just talking about.” I remark that it is a very strange coincidence. “Oh no, there are no coincidences,” she tells me. “Everything happens for a reason.”