Cancer and The Golden Girl

Shannon Miller will be forever remembered as the first U.S. gymnast to capture gold on the balance beam at the 1996 Olympic Games in Atlanta, Georgia. She garnered her second gold that summer after she and her U.S. teammates, the “Magnificent Seven,” took team gold. It was a magical time for the 5’1,” 95-pound gymnast from Oklahoma. By the time she retired in 2000, Miller had attained super star status: she became the most decorated gymnast in U.S. history, with seven Olympic and nine world championship medals. She is the only female athlete to be inducted into the U.S.Olympics Hall of Fame – twice! 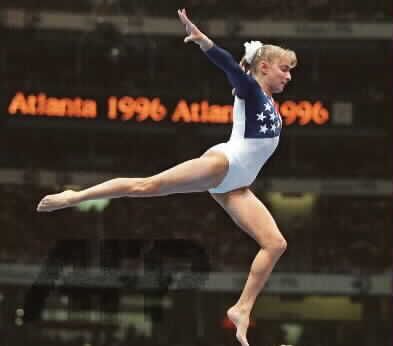 Considered the greatest gymnast the United States has ever produced, Miller is the winner of a combined total of 16 World Championships and Olympic medals between 1991 and 1996, making her the most decorated gymnast, male or female, in U.S. history.

After retirement, Miller got her law degree from the highly-ranked Boston College Law School, began a highly successful career as a motivational speaker, married John Falconetti…the president of Drummond Press publishing… and had a son, Rocco, born in 2009. Shannon also started a website, particularly dedicated to women’s health, called “Shannon Miller Lifestyle,” filled with advice that can save lives.

“It is critical that young women learn to take a proactive role in their health, “explains Miller. “Many times there are absolutely no symptoms to important issues that may arise. “

In Shannon’s case, the issue that surprisingly arose was cancer and early detection was critical. In the middle of December, 2010, she was diagnosed with a germ-cell malignancy.

“I went in for a routine physical with my gynecologist, “says Miller, “and during the pelvic exam he said, ‘I think you have an ovarian cyst. It appears to be about 7 centimeters.’ He told me not to get too worried because often they come and go on their own. He ordered another round of tests. Toward the end of the year, a blood test. At the beginning of 2011, they did a cat scan and ultrasound. My doctor then presented my case to an oncologist, who confirmed a mass that needed to be removed, benign or not.”

“The most agonizing part of preparing for surgery were the questions I had no answers for. Was I going to wake up and find out the cancer had spread? Would the doctors need to do a complete hysterectomy, meaning no more children?”

“On Jan. 13, 2011, surgeons took out a baseball- sized tumor that had been sitting on my ovary and had not caused any pain, discomfort or other symptoms. That was the scariest part: I felt nothing! Unfortunately, women’s cancers often don’t have symptoms, screenings or tests.”

Doctors found Shannon had a malignant germ-cell tumor, a rare form of ovarian cancer that generally occurs in teenagers and women under age 30.

“Surgery went really well. They caught it very early and were able to remove the entire tumor. It had not spread. They removed my left fallopian tube and ovary, but the right is still intact, so I can have more children. I couldn’t lift my son for 8 weeks and that was tough, but I thought I was done and could begin my recovery in a couple months. “

That, unfortunately, was not the case for 34-year old Miller. Her physician, Dr. Steven Buckley, called her a few weeks after surgery to say he had spoken with a number of other physicians and pathologists. They had determined she had a higher grade malignancy than originally thought. They highly recommended nine weeks of chemo therapy.

“I was in my living room. My husband and I were both on the phone. Dr. Buckley was very sweet to call in the evening, rather than let us go through a sleepless night wondering what news we were going to get. When he said the word, “chemo,” I remember looking over at my son, Rocco, sitting in the living room playing with blocks, and thinking, I will do whatever I need to do to be here for him. If that means losing my hair, feeling really awful for nine weeks or longer, I will do it.”

“What got me through? Faith. At some point, you just have to trust in God. For me, clinging to the idea of getting through it all for Rocco, was motivating.”

Chemo was extremely difficult for Miller but she says breaking the nine weeks down, week by week, was very natural for her.

“I kicked into athlete mode,” explains Miller. “The treatment started the second week in March and ended May 2. I decided to try and approach it like I approached preparing for a competition. My nine weeks called for a very intense, aggressive schedule. I would have chemo five days a week for the first week, then once a week for weeks two and three.

After the first five days, I was hospitalized for dehydration and nausea. I didn’t realize it takes time for the chemo to get into your system, and I was still working every day. I did my radio show on Sunday but didn’t make it. Halfway through, I got sick outside the audio booth for 20 minutes. I was taken straight to a hospital. So, there were bumps in the road, but I learned from each experience. After the first week, I realized I needed to keep my fluid and calorie intake up. I also realized I needed to maintain some kind of physical activity.

Thursdays through Sundays were really bad days. I had to rest and try to get food and liquid into my system. On the other days, I would take a walk or do yoga or very light weights. A 10 to 15 minute workout was huge for me. I learned that keeping up a fitness routine during chemo can help reduce the risk of a recurrence. The exercise also helped with depression. It is very easy to slip into depression during this time because you naturally ask, “why me?!” You find yourself secluded because you cannot go out in public due to your depressed immune system. What helped me was blogging on my website and getting out with my husband and son for a walk to the park. I remember being interviewed by Robin Roberts on “Good Morning America” and being asked if there had been a day I hadn’t awakened thinking about cancer. I know that day now…June 4th, 2011…the weekend my younger brother got married. I remember waking up and not thinking about cancer or chemo.”

Miller says surrounding herself with people who could help was also an extremely important part of her recovery.

“If you haven’t gone through this, you don’t understand what kind of a toll this takes on your body and mind. Depression is very real. The thought that ‘I can’t get out of bed today but I have a one-and-a-half-year- old I need to take care of’ can be overwhelming. You need help and you need to accept it. Let friends bring food, take care of your children, clean the house, go grocery shopping. You have to take care of your own health and in doing so, take care of your family. I was going to be healthier for my son and husband. For most women, giving up and learning to rely on someone else is very difficult. But it shouldn’t be, because in the end, it really is a more selfless act.”

Miller continues, “Communication is also key; it’s one of the reasons I started my blog. I realized I could use my voice to help others and get women talking about women’s cancers. I interview lots of survivors for my radio show and I got great advice from all kinds of people including a professional makeup artist who called to tell me how to put on fake eyelashes.

I remember giving a speech after my diagnosis but before going in for cancer surgery, and being really nervous and scared. After the speech, a woman came up to me and said, “I have to tell you, I had the exact same tumor you have and I have two beautiful children. It all worked out and I’m okay.” For me, that was an unbelievable gift. I realized people make it through this. It re-energized me.”

“Cancer has given me another mission, says Shannon. “Cancer is going to touch us all, you or a family member. My mother, Claudia, is a cancer survivor. She had cervical cancer and it was great to have her to talk to. I remember finishing up chemo thinking the sun would shine, the clouds would part, and I’d go run a mile. It didn’t work that way. After two weeks I was still working on fatigue. She said. ‘Don’t worry about it. You will not feel right for two full weeks, then, one day you’re going to wake up and feel normal again’ and that’s exactly what happened.”

“I will admit, losing my hair was one of the most difficult parts. It is so personal. For many of us, losing hair is a sign of sickness. I heard that it comes out in clumps, handfuls at a time. If you let it go on, day by day, you will have hair everywhere. It doesn’t feel good and it hurts when it falls out. So, after talking with a friend of mine who has been through cancer twice, I decided to shave my head early. I waited until the third day; then, my friend threw me a wig party. Friends and family were at my house. We had food, good laughs, tried on wigs, then shaved my head. My husband was wonderful and we filmed the entire journey for my website. For the first couple days, I wouldn’t look in the mirror, it was scary. I was worried my son, Rocco, would be scared when he looked at me. My girlfriend said, “Shannon, if you’re not comfortable with how you look, he won’t be comfortable with you.” So, I started looking in the mirror, touching my head, getting used to it. I played with hats and became so comfortable, my son never flinched. I’m just Mommy and he doesn’t relate my having no hair to illness.

As of right now, I have been given a clean bill of health. I continue to get blood tests every couple months, a cat scan every three to four months and will be watched closely for the next two years. I’m feeling great now…not quite 100%…but I’m not winded going up the stairs and I’m working out thirty to forty minutes on the elliptical machine. I need to be given a clean bill of health before I try to have another child: but, I’m hopeful that will come soon.”

Shannon Miller is hopeful, focused, mindful and healthy…all the things you’d expect from The Golden Girl, the most decorated Olympian gymnast, male or female, in U.S. history.