Ted Kennedy Jr., A Commentary on Disability and Determination

Editor’s update: This interview was conducted in November, 2013 in conjunction with Ted Kennedy Jr.’s keynote address in Houston, Texas to cancer survivors and cancer caregivers. It was the 40th anniversary of the date he lost his leg to cancer at age 12. On April 8, 2014, Kennedy, 52, announced his candidacy for a seat in the Connecticut State Senate representing the state’s 12th district — his first bid for elected office.

The Kennedy clan – America’s First Family – has always been marked by perseverance in the face of struggle, and the uncanny ability to turn tragedy into positive change for the benefit of society. 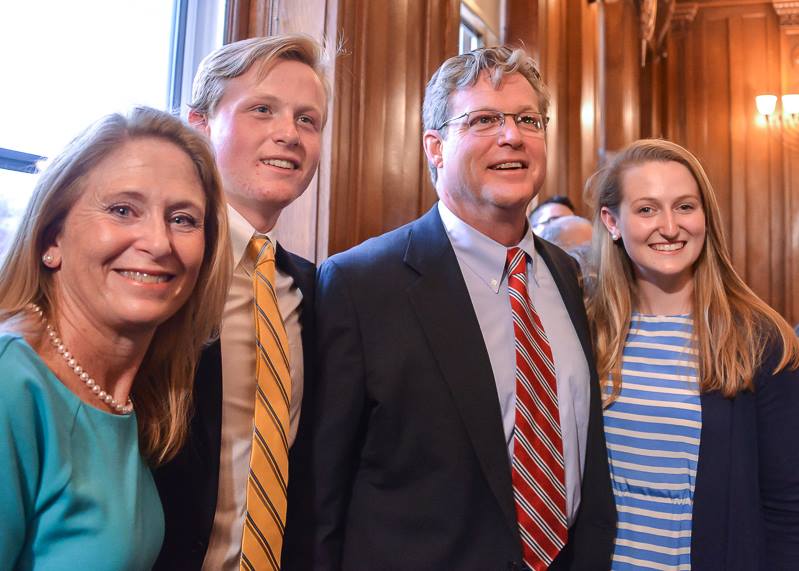 Ted (Edward Moore) Kennedy Jr. embodies this fierce perseverance, and his life’s work in cancer advocacy has saved countless lives. Diagnosed at twelve with osteosarcoma, Kennedy lost his leg from the knee down and went through grueling chemotherapy when the treatment was experimental – before dosages were scaled to effectiveness. While many twelve-year-olds would be left dejected at the prospect of losing a leg, let alone the physical toll of chemotherapy, Kennedy was inspired by the experience, opting to remain positive in the face of adversity and using the experience to help others facing similar challenges. Beyond simply surviving, Kennedy became a health care and disability advocate, changing law and policy to improve the lives of those facing cancer.

I spent time with Ted Kennedy on his recent trip to Houston to address cancer survivors and their caregivers. I came away from our visit with a renewed appreciation of the Kennedy clan’s perseverance, and how all cancer survivors can benefit from embracing the same.

KAS: You were age 12 when you were diagnosed. How did you explain to your parents what was going on?

EMK: Well, it’s interesting. There was a swollen part on my leg, right below my kneecap and it was hurting me. I told my parents I needed to go to the doctor and they took me to see my pediatrician… who told me to soak it in Epsom salt. And then, of course, it got worse. I was skateboarding and fell down, and I hit the curb and hit that part of my knee and it throbbed for about an hour. And then I said, “I really need to go to the doctor.” They did an x-ray and the doctors knew right away. I had a biopsy the very next day and then the day after that, I lost my leg. So it all happened very quickly. Of course, the initial diagnosis was a misdiagnosis. In fairness to the doctor, there are only 400 cases a year in the United States with my type of cancer – even today. This doctor probably never saw a case like it.

KAS: It’s obviously difficult for parents to hear their child has cancer. Do you remember what your parents told you? It’s one thing to say you have cancer but then to have to tell your 12 year-old that he will lose his leg – how did your parents do that?

EMK: My father said, “We have to remove part of your leg.” And by that I thought they meant they had to carve out the swollen part. I said, “You mean they have to cut out the swollen part?” And he said, “Well, not exactly. They need to cut from the knee, down.” And I thought, uh-oh. Obviously it came as a shock. But the whole thing was like a whirlwind because it happened so fast. There was a real need to operate right away.

KAS: Do you think being 12 made it easier to hear you were losing your leg, than if say you were in your mid-twenties?

EMK: I think so, because I think that children are more naturally optimistic than adults and they don’t really think of mortality. I think kids are more easily adaptable. For me, learning how to use an artificial leg was easier than if I had been an adult. There are stories of people that are 50 or 60 years old that lose their legs and they can’t get used to it – they get depressed – they have trouble being adaptable. Kids are more adaptable and I think adaptability is one of the key ingredients to dealing with a cancer diagnosis because I think you need to constantly adjust to a new situation. People who aren’t good with that aren’t going to be as successful in their recovery.

KAS: In addition to the amputation, what other treatments did you receive?

EMK: I had a year and a half of chemotherapy. They were pretty sure that when they removed my leg that they got the cancer but they weren’t a hundred percent, because most of the time people with my type of cancer, it metastasizes to the lungs or some other part of the body. It was very crude, the x-ray technology — this was 1973. Chemotherapy, the concept of addressing cancer via pharmaceuticals they inject into your veins, had only just been developed, if you can believe that. I was like the sixth person to enroll in the clinical trial for this high-dose methotrexate. Methotrexate is what we still use, some 40 plus years later and used for lots of different things, but not in the same concentration. I had a very high concentration. In fact, the dose they gave me was 10 times the dose that they give today. They didn’t know what the effective dose was when they were treating me. They soon discovered that they could give a far less dose and still have the same response, but I was basically bombarded with the methotrexate.

KAS: Do you still remember receiving treatment and what it felt like?

EMK: Oh yeah, of course, you don’t forget that. And of course, I lost all my hair. I was very, very sick. I had the mouth sores. I couldn’t eat. I lost a lot of weight.

KAS: Were you out of school?

EMK: Well, no, I would have to go in every three weeks for the treatments and they would discharge me. Just as I would start feeling better, I’d go back in the hospital. During this time I was able to keep up at school – I was in seventh grade – and my parents got me a tutor. Actually, I didn’t miss any school. I’m not saying I did well in school, but I didn’t have to repeat the grade or anything.

KAS: How long did it take you to bounce back physically?

EMK: Well, after the chemo stopped, I was able to start feeling good again. That wasn’t until the middle of the eighth grade though.

KAS: How long did it take you to adjust to a prosthetic leg?

EMK: I literally had a wooden leg. They would take a piece of wood and carve out – using machinery, they wouldn’t chisel it out – they would carve it out and hand it to you and if it didn’t fit right, well there wasn’t anything they could do about it because they’d already carved it out. These days they can mold it and it’s so much more comfortable. Oh, but back then it was so painful. I didn’t really complain about it because I just figured this is the best product that they have, right? This is the best product and my parents have taken me to the best person they could find so I just kind of accepted it. At the end of the day, I could take it and turn it upside down and there would be blood coming out of it. It was terrible, really bad.

KAS: At what age did you get a modern prosthetic leg and look back and say, I had no idea I was so uncomfortable?

EMK: I think when they started developing these newer legs, but that was only in the last twenty years, maybe.

KAS: So do you think having cancer at an early age made you grow up a bit faster and make you more independent?

EMK: I think that it certainly gave me perspective, provided me with a lot of perspective—meaning that everyday problems that we all confront, that are aggravating and bothersome and that we all can’t control – I think it’s given me the perspective in life about what to worry about. In terms of independence, I think kids naturally like to do things on their own.

KAS: You told a story in your father’s eulogy about climbing up the snowy, icy hill and how your father said to you, “We’re going to do this if it takes all day.” Did your parents constantly encourage you to do things on your own?

EMK: Yes, they did. And I think part of what helped was meeting other people that had a similar experience, which is why I think CancerForward is such a great organization, connecting people that have had similar experiences. Everyone can be a source of, a power of example for others. I didn’t know anyone that had lost a leg. My parents sent me on a ski trip by myself – just a bus trip to Pennsylvania from Washington – a little mountain type of thing – but it was a ski trip for amputees. We got on the bus and we didn’t really talk about or spend a lot of time talking about our stories – we were just together. And I think that was actually really helpful because just being with people who’d had a similar experience was great.

KAS: What are your goals for advocating for people who have gone through your same experiences regarding cancer and for people with disabilities?

EMK: I focus my energy a lot on what happens to people once they leave the hospital. I’m not a doctor, I’m not a health care professional, but there are a lot of issues that impact cancer patients. For example, I think one of the positive things about healthcare reform right now is that for people with cancer, or a history of cancer, insurance companies can no longer reject you for pre-existing conditions; because even if you’re cured of cancer, when you walk out of that hospital you still have this pre-existing condition and now you can’t be discriminated against for your health status. Fortunately, the American with Disabilities Act is relevant because people are still not offered a job or fired from their job because of their cancer diagnosis so I spend most of my time today, focusing on those issues too.

KAS: How do you think your own diagnosis with cancer prepared you for when your sister and father were diagnosed? Did they seek your advice? How were you able to share your perspective?

EMK: Their cancers were very different but I think that the treatment reminded me a lot of my own experience. You learn a lot about somebody by how they confront the situation and accept the situation. I think that maintaining a positive attitude is important. There are some people who are diagnosed and get very depressed and don’t do well with their treatment.

Why is it that some people are able to cope and deal with while other people can’t? I think it lies with their overall outlook in life and support system. You need to not isolate. They have done studies on cancer patients, on married versus non-married couples, and the married stay alive longer. CancerForward is connecting people and if you’re isolated emotionally and physically from other people you’re not going to do as well. That’s one of the reasons why I’m here today, to advocate for the great work being done at CancerForward.